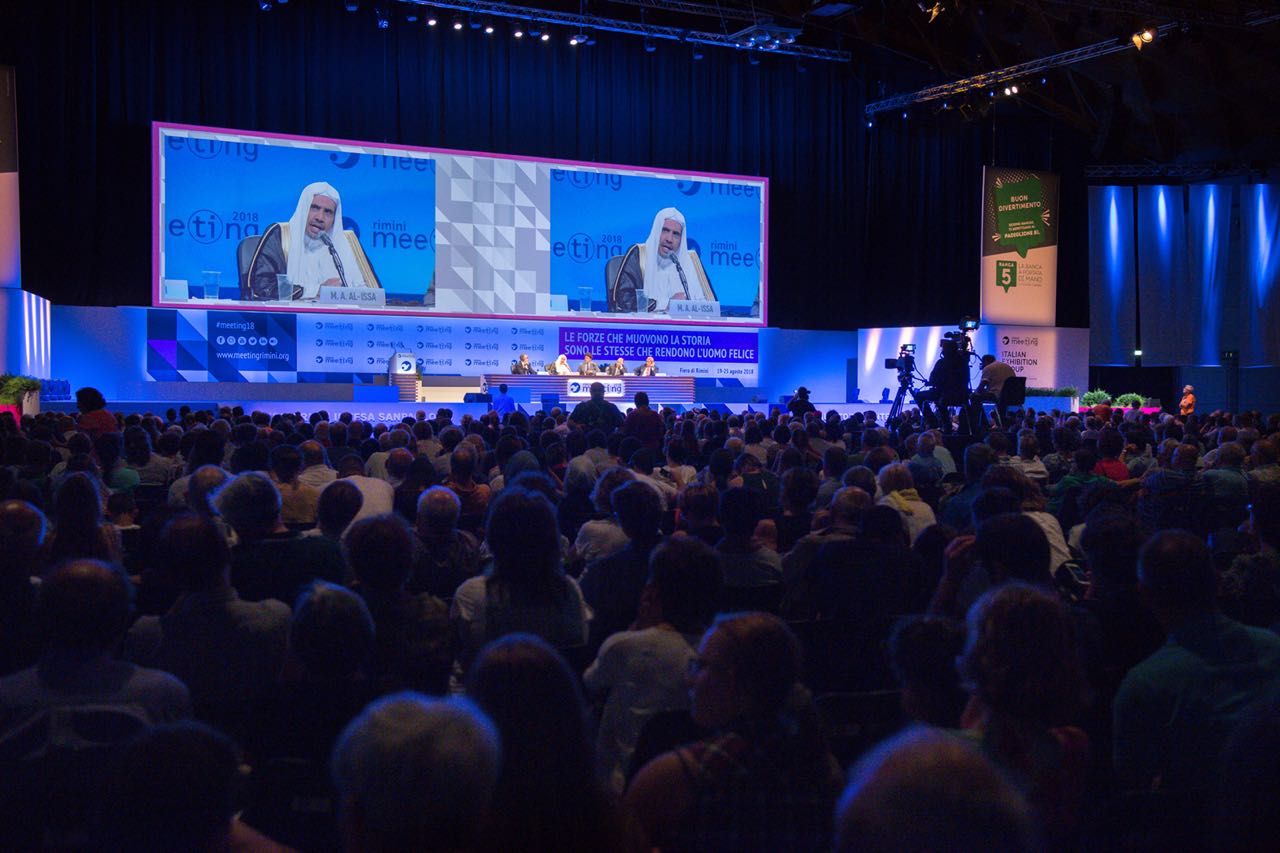 The Muslim World League was Selected to Speak on Behalf of Muslim Civilization in a Meeting for "Building Bridges" in Italy. More than One Million People Attended the Event.

On behalf of the Muslim peoples, His Excellency the Muslim World League’s Secretary General Sheikh Dr. Mohammed bin Abdulkarim Alissa spoke at the events of Friendship among the Peoples in the Italian city of Rimini. The event started with the participation of political and religious leaders, along with other scholarly and intellectual activities, and the presence of more than one million people. The Muslim World League was invited to be the speaking voice of the Muslim world.

The international meeting continued for a week, with seminars and open discussion sessions aimed at bridging the gap between the peoples of the world and highlighting the importance of values of coexistence and understanding among nations and cultures in what could be termed as the world's largest gathering.

This was the first time that the concepts of Islamic thought, culture and civilization were scheduled in this large international gathering. His Excellency Sheikh Mohammed Alissa was selected as representative of the Muslim world, while Pope Francis spoke on behalf the Christian world, in addition to the Italian president Sergio Mattarella; the Secretary-General of the United Nations Antonio Gutierrez. So also did a number of leaders, thinkers, creators, artists and academics from more than 30 countries. Several security and cooperation ministers of the European Union also took part in the event.

Based on the Organizing Committee recommendation, the Conference selected Sheikh Dr. Mohammed Alissa, representative of the Islamic civilization to talk about Islamic culture: "In recognition of his speech on behalf of the Muslim World League, which has become important and influential in its overtures in extending bridges between cultures and peoples. The speech, characterized by depth and clarity, has also contributed to the reform of many concepts of Islamic culture and civilization; it relied on documented irrefutable facts thus earning appreciation and trust. It also contributed to overcome many negative concepts that have been falsely attributed to Islam through clear and serious changes in religious and intellectual dialogues, in addition to mutual respect based on the referral to religious script in looking forward towards building bridges between peoples."

The Secretary-General delivered a speech in the presence of more than five thousand people. He acknowledged the Creator’s command in people’s diversity in colors, languages, religions, creed, ideas and cultures. He added that Allah has honored everyone and has not excluded any.  This celestial decree stems after all from divine mercy and justice. Thus, the pure at hearts full of love and goodness readily accepted this divine compassion and fairness. They have realized that in many aspects of this diversity human richness is a potent force for dialogue, coexistence, cooperation and peace. He pointed out that evil was not satisfied with this idea; it launched hatred, ignited wars, and initiated injustice, classifying people based on racism and oppression. Evil raised the slogan of the clash of civilizations and made conflict not peace or harmony, the first tenet on our planet. Evil founded a theory that difference and diversity mean clash, and no one should enjoy dignity except his religious, ethnic or partisan groups, whether it declared this precept or exercised it without declaration.

Dr. Alissa cautioned that these concepts still hold on this obsessive idea which is devoid of any human feelings on the moral side, and denuded of any logic on the rational side; and lacks wisdom, hence it prevents taking heed of history’s lessons. The carriers of these concepts will be the first to pay dearly for their risky undertakings, no matter how long they will enjoy their ephemeral and deceptive victories. He also mentioned that there is the duty of everyone to realize that there are groups that have reached this intellectual abysmal decadence based on extremist religious or philosophical persuasions. These also represent isolated cases in every religion, at any time. There is no religion founded on extremism, however, there is no religion free of extremists. In their own theories, there are many extremist philosophies that are closer in providing philosophical hallucinations than to offer a rational logic. His Excellency mentioned that there exists extremism and counter-extremism.

The Secretary-General stressed that the Muslim World League, which is the voice of Muslim peoples, has felt the importance of clarifying the truth of Islam, which has loved, coexisted, engaged and cooperated with all, after Islamically isolated evil, mad, and ignorant extremism has tried to harm it and hijack it. One cannot imagine any religion which is incompatible with life can survive for more than fourteen hundred years; that is Islam’s age to this day. It is still among the most widely distributed geographically and in growth, where Muslims today number nearly one billion and eight hundred million people. All of them appreciate and understand God’s design in multiple religions and ideas. All of them also understand the culture of others and consider coexistence, harmony, tolerance and peace a high moral value in their religion as evidenced by clear texts in the Holy Quran and Sunna. They also confront those who misuse these texts either through misinterpretation, or deliberately misusing them for any purpose.

Dr. Alissa stressed that it is neither sensible nor fair that Islam with its 100 of millions of people should be likened to an extremist category – which based on the Muslim World League’s statistics- doesn’t exceed one single extremist person compared to the remainder 200,000 Muslim individuals who represent the moderate Islam. Religious and cultural differences among humans are undeniable facts, no matter how large the gap in some of their origins or branches might be, it should not, however, justify turning the world into an arena of conflicts. This difference falls within the Creator's plan in the reality of pluralism and diversity, the latter must never clash with the importance of co-existence and cooperation; for, kindness and love for all must be a basic condition to live free in peace and harmony.

His Excellency the Secretary General stated that history has immortalized those who sacrificed themselves in order to confront hatred, racism and other forms of injustice. In contrast, history in its fair sagacity has crushed those who have raised the banner of hatred and injustice against humanity for religious, racial or even purely material reasons. Despite the approval of everybody of the existence of mutual stereotypical images circulating among some nations, peoples and cultures, few only realize that they are result of a lack of dialogue, which often leads to the adoption of mono-source information.

Dr. Alissa called on behalf of the Muslim World League and the peoples who are under its banner, to replace conflict with dialogue and base their understanding on mutual respect rather than the policies of hegemony and superiority. He stressed that it is a message that expresses the views of about one and a half billion Muslims committed to the values of their religion that call for the highest ethical standards. A message that urges extending bridges of peace and human harmony in all life’s issues, at the top of which are the rights of minorities, women and human beings, migration issues, national integration, human trafficking, problems of poverty and ignorance, all are required to do more work and double efforts for these problems.

The Secretary General mentioned the role of the World Organizations affiliated with the Muslim World League in their relief and development missions around the world, which are estimated at hundreds of millions of dollars annually without any consideration to their charitable work except the human side. Aids are provided indiscriminately to everyone regardless of religious, ethnic or other reasons or backgrounds. The MWL provides all its services in straightforward and transparent coordination with the government of each country the Rabita is working on its territory. It enjoys strong relations with different religions and sects, and has exchanged visits with everybody and conducted and organized events that represent and promote shared values.

Dr. Alissa concluded his speech thanking the distinguished conference organizers and expressed his appreciation for the opportunity to talk about the Muslim side and its global organization, the Muslim World League, brings together hundreds of millions of Muslims from its headquarters which represent their Qibla (the direction towards Makkah). Their spiritual all-encompassing link, Makkah. 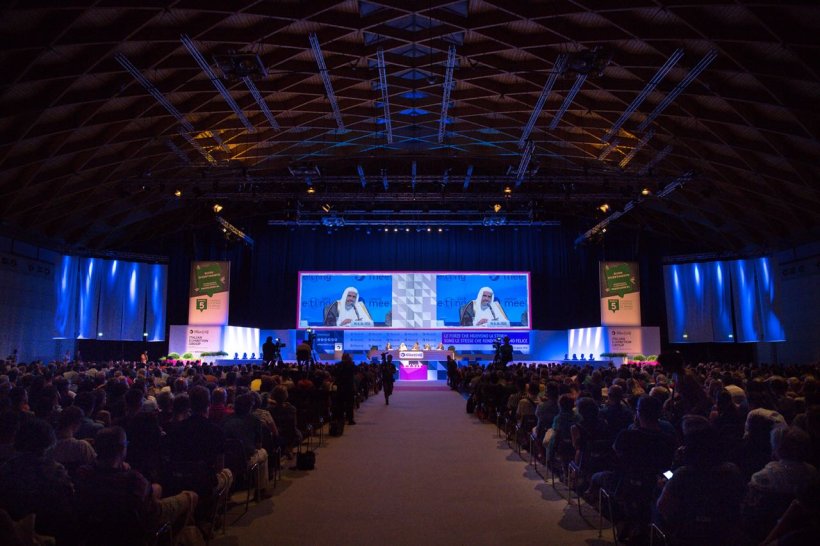 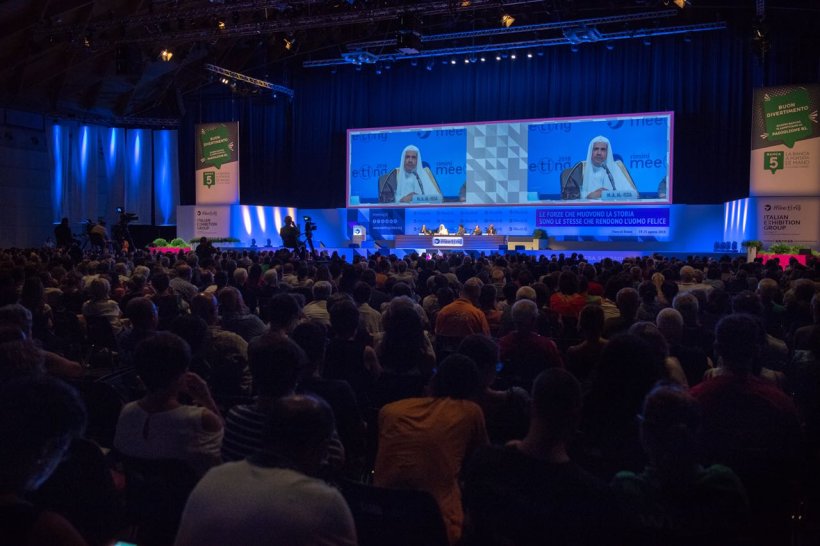 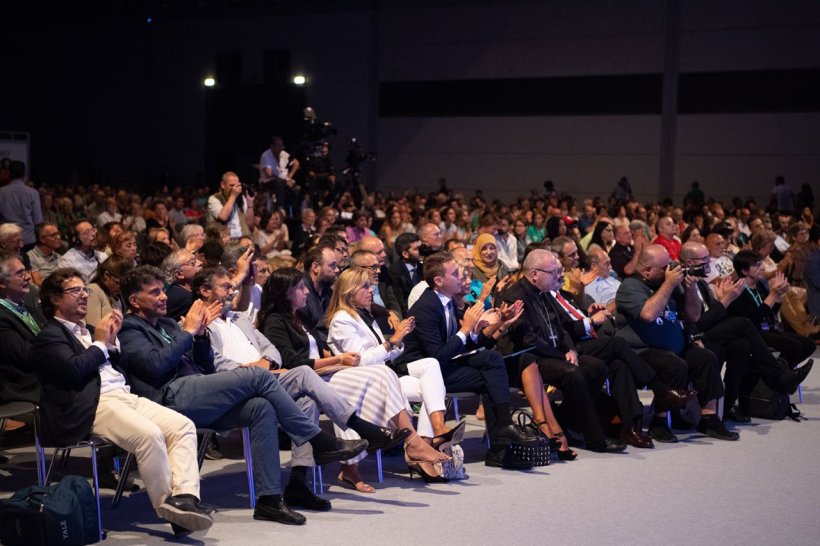 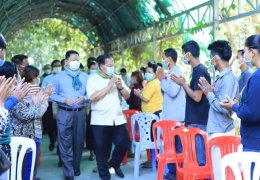 Earlier this month, relief packages were delivered to families affected by the recent floods in Cambodia 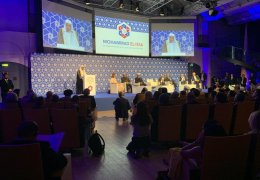 On International Solidarity Day, the MWL recalls the spirit of friendship & understanding that unites us