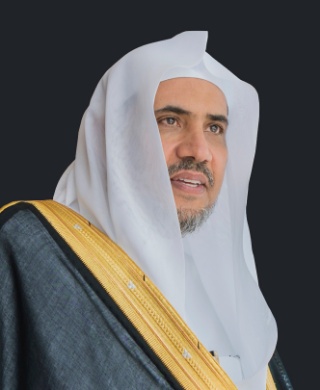 His Excellency Dr. Mohammad bin Abdulkarim Al-Issa is widely recognized as a leading global voice on moderate Islam, committed to bringing global awareness to the religion’s true message of empathy, understanding and cooperation among all people.

As Secretary General of the Muslim World League, a Makkah-based non-governmental organization that represents adherents of the Islamic faith around the world, Dr. Al-Issa has been a trailblazer in building new partnerships among different communities, faiths and nations. He also held a public honorary position as Supervisor of the Ministry of Defense's Intellectual Warfare Center.

Dr. Al-Issa’s groundbreaking interfaith efforts include his trip to Auschwitz in January 2020 for the 75th anniversary of the liberation of the death camp. The Auschwitz Museum declared it the most senior Islamic delegation ever to visit. He also met with His Holiness Pope Francis in 2017 to forge a first of its kind agreement between MWL and the Vatican. In 2019, Dr. Al-Issa led representatives of the Abrahamic religions in France in signing an agreement for peace and solidarity, and held a conference on reconciliation in Sri Lanka to heal inter-religious divides created by the terrible Easter terrorist attacks.

The American Jewish Committee (AJC) has described Dr. Al-Issa as “the most powerful voice in the Muslim world promoting moderate Islam.” Cardinal Timothy Dolan has called Dr. Al-Issa “the most eloquent spokesman in the Islamic world for reconciliation and friendship among the religions.” President Russell Nelson of the Church of Jesus Christ of Latter-day Saints said, "You are a peacemaker. You are a bridge builder. And we need more leaders like you." in a meeting with Dr. Al-Issa.

The 2019 U.S. State Department Report on Counterterrorism hailed Dr. Al- Issa’s leadership in promoting moderate Islam: “He continues to work hard to deliver the message of moderation and coexistence internationally, including efforts to reach out to Muslim minority communities, Jewish communities in the United States and Europe, and Christian churches in the Middle East."

LEADERSHIP OF THE MUSLIM WORLD LEAGUE

Dr. Al-Issa assumed his current role as Secretary-General of the Muslim World League in August 2016. In the same year, he became Chairman of the International Body of Muslim Scholars and a member of the Senior Scholars Organization in Saudi Arabia.

Over the last three years, Dr. Al-Issa has travelled extensively throughout the United States, Europe, Africa and Asia, meeting with dignitaries and parliamentarians from the fields of justice, law and human rights, and major faith-based and community leaders.

To advance his vision of civilizational and cultural dialogue, Dr. Al-Issa visited the Vatican in September 2017 to meet Pope Francis and the late Cardinal Jean-Louis Tauran, Chairman of the Pontifical Council for Interreligious Dialogue. Those discussions led to an unprecedented partnership between the MWL and The Holy See, and paved the way for the most senior visit ever by a Vatican official to the Kingdom of Saudi Arabia in April 2018.

Dr. Al-Issa continues to meet with senior leaders of politics, religion, science, thought and culture to explore ways to advance constructive cooperation and counteract extremism. He has advocated holistic strategies that focus on dialogue and education to immunize communities of different religions against the threat of extremism. He has introduced policy initiatives to address hate speech and racism that incites violent extremism.

Over the past year, Dr. Al-Issa has signed several cooperation agreements with some of the largest Jewish institutions operating in the United States and globally. The agreements included the largest synagogue in the U.S. and the AJC, and focus on promoting common values, protecting religious sites of worship and building greater interfaith understanding. Earlier this year, Dr. Al-Issa finalized a cooperation agreement with the Russian Orthodox Church and Patriarch Kirill of Moscow, in another interreligious initiative without precedent. In September, he orchestrated the first agreement between leaders of the Abrahamic religions in Paris, joining Jewish, Catholic, Protestant and Orthodox Christian leaders in an agreement committing to harmony and solidarity.

In May 2019, Dr. Al-Issa led a summit of more than 1,200 notable scholars, which culminated in the historic Charter of Makkah to advance the principles of moderate Islam and interfaith partnership.

In January 2020, Dr. Al-Issa became the most senior Islamic leader to visit the German Nazi concentration and extermination camp as part of a joint MWL- AJC visit to Jewish historical and cultural sites in Poland. As part of this trip, he lit candles before the Death Wall at Auschwitz and the International Monument at Auschwitz II-Birkenau. Dr. Al-Issa also visited the POLIN Museum of the History of Polish Jews and the Nozyk Synagogue, the only surviving prewar Jewish house of prayer in Warsaw.

Dr. Al-Issa also visited Sri Lanka to meet with Buddhist and Muslim religious leaders to promote healing and integration in the wake of the country’s deadly Easter attacks. He received the Order of Peace from Sri Lankan President Maithripala Sirisena.

Dr. Al-Issa frequently lectures at international events. He represented the Muslim world in commemorating the annual anniversary of the atomic bomb dropping on Hiroshima, Japan, in 2017, in the presence of Prime Minister Shinzo Abe. He established the Centre for Responsible Leadership, an initiative dedicated to assembling global thought leaders to find sustainable solutions to the societal challenges facing the world today.

Born and raised in Saudi Arabia, Dr. Al-Issa completed his studies at the University of Imam Muhammad bin Saud Islamic University, where he earned a Master’s degree and a PhD in Comparative Judicial Studies (Constitutional Law).

Thereafter, Dr. Al-Issa held many prestigious public offices in Saudi Arabia. He was a former Minister of Justice from February 14, 2009 until January 30, 2015. Rising to the highest rank of Chief Appellate Judge. In April 2007, he was appointed Vice President of the Court of Grievances.

As Minister of Justice, Dr. Al-Issa was credited both in Saudi Arabia and abroad for ushering in several key reforms, including legislative reforms in family matters, humanitarian cases, and for the rights of women.

In November of 2012, the Council of Arab Ministers of Justice selected him as its honorary president. He joined the teaching staff at the College of Law and Political Science at King Saud University, and the Higher Judicial Institute of Al-Imam Mohammad Bin Saud Islamic University.

As a leader in combating violent extremism in all its forms, Dr. Al-Issa held a public honorary position as Supervisor of the Ministry of Defense's Intellectual Warfare Center, in efforts to combat the proliferation of extremist ideology on social media and elsewhere.

Since 2017, he has served as General Supervisor of the King Salman Center for International Peace (KSIPC) in Malaysia. The Kingdom of Malaysia awarded Dr. Al-Issa its highest award, the “Dato Seri” at a ceremony convened by the Sultan Muhammad V. The Republic of Singapore also has honored Dr. Al-Issa for his international efforts in promoting tolerance, coexistence and peace.

In August 2017, Dr. Al-Issa delivered a keynote speech on behalf of Muslims at the International Summit on Religion at Mount Hai in Kyoto, Japan, presided over by the chief priest of the Tendai Buddhist sect. A year later, Dr. Al-Issa delivered an address on behalf of Muslims around the world at the 39th Meeting for Friendship Among People in the Italian city of Rimini.

Dr. Al-Issa is the recipient of numerous domestic and international awards, including the Galileo International Award of 2018, awarded by the Galileo Foundation in Florence, Italy, for his international achievements and pioneering leadership in promoting religious and cultural peace and harmony.

Dr. Al-Issa also received the Moderation Prize of 2018 from the Governor of Makkah Region for his distinguished and outstanding efforts in promoting moderation.

In 2019, Dr. Al-Issa received an honorary doctorate from the Institute of Orientalism in the Federal Republic of Russia. And in Senegal, President Macky Sall conferred on Dr. Al-Issa the Grand Order of the State in recognition of his global efforts in promoting religious moderation, intercultural harmony, and humanitarian programs around the world.

At the 40th annual Rimini Meeting hosted by the Florence School of Advanced Studies for Interreligious and Intercultural Dialogue, Dr. Al-Issa was awarded the “Children of Abraham” award alongside the Foundation for Ethnic Understanding’s Rabbi Marc Schneier.

Dr. Al-Issa also received the Peace Prize from the Arab-American Relations Council in Washington, D.C. in 2019.

In May 27, 2021: The Islamic World Educational, Scientific, and Cultural Organization (ICESCO) presented Dr. Al-Issa with the organization’s Gold Shield for his contribution to the joint Islamic work, promoting civilizational values in the Prophet’s biography, his unwavering support to the issues facing Muslims around the world and his efforts to consolidate international peace.

In July 2021, Dr. Al-Issa was awarded an honorary doctorate by the U.N.’s University of Peace for “outstanding efforts in supporting international diplomacy, promoting friendship and cooperation among people, and effective endeavors in combating hate”.

In the presence of His Majesty the King and Prime Minister:
The Malaysian government announces that His Excellency Sheikh Dr. Mohammad bin Abdulkarim Al-Issa has won the New Hijri Year Award as the First Islamic Personality. He was presented with the award signed by Prime Minister Muhyiddin Yassin.

In November 2021, Dr. Al-Issa received the Norwegian Bridge Builder Award for his contributions to building bridges between individuals, nations and societies. The Award Committee commended Dr. Al-Issa as a leading force in promoting moderation, peace and cooperation among all communities, faiths and beliefs.

On this February 2022, and in an official celebration attended by senior officials, His Excellency, the President of the Republic of the Maldives Mr. Ibrahim Saleh, bestowed the Order of Honor on Dr. Mohammad Al-Issa, in appreciation for his efforts in working on Islamic unity and promoting harmony and peace in the world.

Dr. Al-Issa is the recipient of numerous domestic and international awards for his leadership in promoting interreligious dialogue and moderation and fighting extremism and hateful rhetoric.

In the past year, Dr. Al-Issa has been published in leading international publications, spreading his vision of moderation and mutual understanding.

• How Auschwitz has united Muslims and Jews (Chicago Tribune)
• Why Muslims from around the world should remember the Holocaust (The Washington Post)
• I Lead the Muslim World League. Here is Why I Broke Taboos to Acknowledge the Holocaust (Newsweek)
• My advice to Ilhan Omar and Rashida Tlaib (Fox News)
• A Ramadan for the World (The Washington Times)
• As Head of the Muslim World League, I See Islamic Leaders Calling for Tolerance More than Ever (Newsweek)
• Opinion for All: Muslims and Latter-day Saints can be leaders in building tolerance (Deseret News) 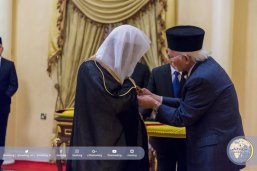 The Sultan of Malaysia confer the highest State Order: Dato… 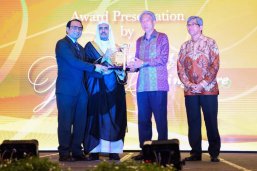 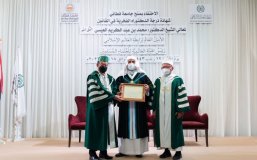 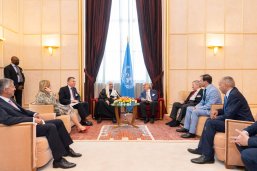 Mohammad Alissa receives award from UN body for his “… 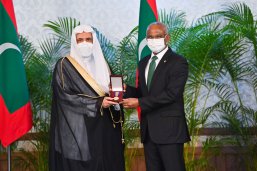 H.E. Dr. Mohammad Alissa received the Order of Honor of the… 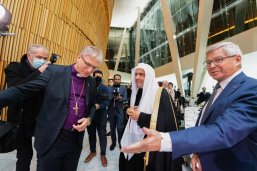 HE Dr. Mohammad Alissa was awarded the 2021 Bridge Builder… 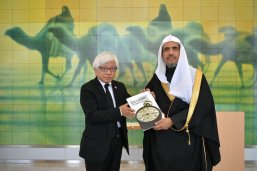