Excerpts from the SG Dr. Mohammad A. Alissa addressing world religious leaders and intellectuals as well as some politicians and journalists

Excerpts from the SG Dr. Mohammad A. Alissa addressing world religious leaders and intellectuals as well as some politicians and journalists, at the opening of the Conference organized two days ago in Vienna on "Promoting Peaceful Coexistence and Common Citizenship".

HE Dr. Alissa says: "International personalities, bodies and entities participating at the Conference of Followers of religions and cultures applaud King Salman Center for World Peace".

Secretary General of the Muslim World League says, "The discourse pursued by the Kingdom of Saudi Arabia and the moderate approach adopted by it set things in the right course.".

Humanity still suffers from a vacuum in its coexistence and harmony

The more we depart from our human description, the more we will lose a degree of merit or entitlement equal to such departure and abandonment

Religious and cultural conflict is attributed to erroneous thinking that did not believe basically in the Creator's law on difference, diversity and pluralism and not even in choice.

Harmony among mankind is essential to the integrity, honor and very existence of the individual human being.

When we appreciate each others' specialties regarding religious, sectarian, cultural and intellectual conviction, we generally reach a high level of wisdom and civilization

Islam has honored human beings, basically guaranteed them freedom of choice and guided them to moral principles

The values of justice and ethics are not contingent upon certain theories, contexts or many communalities

The sagacious individuals always seek to adopt wisdom, irrespective of its source

We are in greater need of a quality life and humane existence to reach our social, political and moral justice

The unfortunate retreat in faith has made our amazing universe to be counted as nonsense, non-existent imagination, but when it denied faith unseen aspects, it forgot that it embraced a faith that is more intense in the unseen aspects than its repudiated unseen

Values do draw the course of interests, not vice versa

In the context of our present diversity, we call for the preservation of the values of the common human instinct that do not represent any particular religious, intellectual or cultural characteristic

We must preserve the nature of our humanity so that it doesn't change into another one, hence it prevents our human status on the common earth from becoming imbalanced.

The most values of justice and ethics are undisputed human communalities

The constructive and effective dialogue eliminates the human tendency for isolation that created hatred, extremism and counter- extremism

The winner in the social battle of hatred and exclusion is considered to have just provisionally triumphed; he is virtually a loser

Religions are basically innocent of the unjust wars and persecutions practiced in their names as well as that they should not also be responsible for hindering the advancement of knowledge and enlightenment in the East and West.

Only individuals perpetrating the bloody conflict and the groups supervising its activities, throughout its time span and under any slogan adopted by it, should solely bear its responsibility

The human intellect, which has realized material knowledge, is still wounded regarding the social value of its communalities, an act we all agree upon

The more we properly understand the wisdom of our ethnic diversity, the more we become deeply convinced that it is indeed a source of integration, cooperation, and enrichment, not hatred, fear and exclusion. 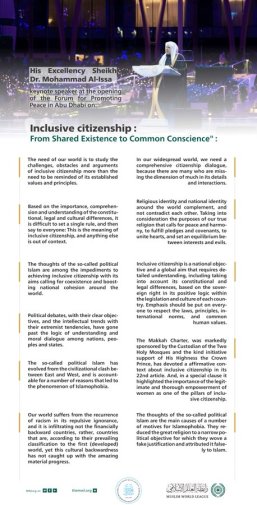 Excerpts from His Excellency Dr. Mohammad Alissa's keynote speech at the opening ceremony of the 8th Forum for Promoting Peace in Muslim Societies held at Expo 2020 Dubai: 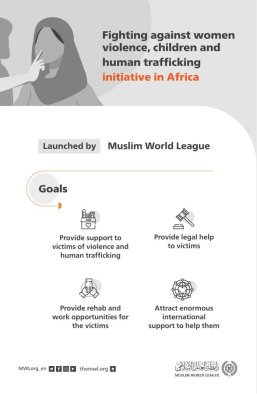 The Combating Violence and Human Trafficking against Women and Children initiatives are some of the most important international programs launched by the Muslim World League to combat these internationally criminalized actions: