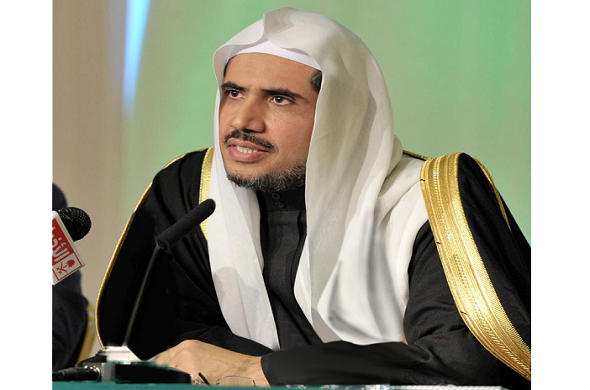 His Excellency Mr. Mammon Hussein, President of the Islamic Republic of Pakistan

Peace be upon you all along with God's mercy and blessings. May Allah make your current meeting a happy occasion crowned with success, goodness and well-being to our Nation and to our religion. Let us make this conference a contribution leading to a more rational discourse from the Umma and addressed to the same Umma. It must encompass the aspects of Dawa, education, media and politics. Ours, must be a mature and refined discourse; moderate and balanced in its judgment and seeking truth and integrity in its substance; beauty in its spirit and style. The discourse should rise above nonsense in its dealings. It must elevate the nation’s consciousness and behavior in matters related to the achievement of its goals and the fulfillment of its mission. This must be particularly more so with regard to the ideological security that will safeguards the Umma’s identity and communal peace which will preserve its existence from rifts and conflicts.

Moderation is the trait of our Nation and a policy of its true and pure religion. Almighty Allah says in Sura Al-Baqara, verse 143: In this way He described the Umma. As for the religion, He says in Sura Al-An’am, verse 153.  He also says in the same Sura, verse 161: “” Values ​​and Hanif mean the true path, as interpreted by Tabari, and integrity is the middle road. Whoever chooses a different path than this will lead him to the warped way, aberration and blameworthy excess.

The core of moderation that characterizes the final Sharia of Mohammad lies in easing and lifting embarrassment and distress off people, which were prevalent in some previous laws; as punishment for them. In Sura Al-A’raf, verse 157, Allah says: “”. Allah also says in Sura Al-Hajj, verse 78: “”. It’s stated in one Hadith: "I have been sent with a pure and tolerant (religion)" Another one mentions the following: “facilitate and not use hardship; give glad tidings, and don’t fend off (people). In a third Hadith, the Prophet said: "The religion is ease and anyone making religion difficult will be defeated”. He also repeated the following warning thrice: “Perish those who seek and follow extremes (in religion).” He further stated: “Beware of extremism in religion, for excessiveness in religion has destroyed those who came before you”.

Islam is universal and eternal message, it enjoys acceptability and is predisposed to be disseminated with ease; it is after all a message of mercy. Allah says in Sura Al-Anbiya, verse 107: “”. Its law is a sturdy structure along with realistic common sense, innate nature and factual standards; it’s in perfect harmony with people’s interests. Ibn al-Qayyim, God blesses his soul said: “Sharia premises and foundations are based on wisdom and the interests of people in life and hereafter; all of it is justice, mercy, wellbeing, and wisdom. Any issue moving from justice to injustice, from mercy to something opposite, and from uprightness to corruption, and from wisdom to distortion isn’t and won’t be part of Sharia.”

Throughout the ages, Islam’s scholars have emphasized that Wasatiya is a fixed principle and an authentic approach in various aspects of Islamic culture and its branches. This principle is clearly evident on the levels of perceptions, concepts, behavior and application and in fundamentals and branches as well as in faith and actions.

Highlighting the milestones of this moderate platform will clear tough issues and expose innovations. And eventually will uncover the way of extreme zealots and fanatics and  refute their arguments.

Islam’s moderation is a true reflection of the flexibility it enjoys when dealing with matters and policies of ingenuity in its response to the reality and changes of its trends. All of this must be made within the context of faith-based fundamentals and unwavering legislation, in addition to the Umma’s ideological and political unity and cultural autonomy.

In all of its various events, the Muslim World League has always emphasized the value of concerted efforts of scholars; the carriers of knowledge as well as the leaders of Dawa and reform and institutions of learning and the media. These are called upon to consolidate Islam’s moderate and tolerant model in the Nation’s public consciousness. They must stand up to the theoreticians and half-educated obscurantist who rush to accuse one and all of apostasy, spread misinformation, and challenge scholars. They must face up to those insurgents who rise up against legitimate rulers. Their actions seem attractive and bold undertakings in the eyes of gullible youths who, for the lack of thorough understanding of religious science and weak links to scholars, become easy victims to these predators. Moreover, the latter’s dismal levels of religious education makes them easy preys to lurking marauders prowling the networks using social media looking for new recruits.

It is no secret that ideological extremism has given rise to organizations which practice violence and terrorism in the name of religion and under its motto.  It is an expansive phenomenon that has cast its gloomy darkness over Muslim communities. They have weakened them and terrorized them through strife and bitter conflicts, they undermined security and busted the economy. Social relations within communities have been impacted negatively and deteriorated extremely. Moreover, this bothersome phenomenon has weakened relations with the religious authority. Furthermore, it has emboldened naïve, incompetent and ignorant individuals against scholars and muftis. These, have glossed lackluster names- whose only intake of knowledge is morbid understanding and hollow claims- and propelled them to prominence.

It must be well understood that in order to address this phenomenon, comprehensive analysis in a wide-ranging manner and in all its aspects must be undertaken. Investigating its ideological, psychological and social dimensions is required in order to evaluate its causes and monitor its various effects and impact. Then, once overall conclusions have been reached, a suitable remedy must be extracted to deal with its ills.

Security is one of the necessities of individuals and collective life. It needs components and requirements that will guaranty its stability and continuity. The most important of these elements is to establish justice without discrimination or bias. The determination to maintain people’s rights must be supported. Crime, chaos and corruption phenomena must be stopped. One must deal firmly with those who violate privacies and sanctities, insult religious and social values under the pretexts of freedom of speech and human rights.

These efforts must go hand in hand with tasks of raising awareness and implementing social education. The sanctity of justice, rights, human dignity and the magnitude of positive social relationships- as clarified by Islam in providing mutual respect among people; and the affirmation of the right of the group must take precedence. Cooperation in righteousness and piety as well as the promotion of Virtue and Prevention of Vice must be espoused. Society must be taught to respect public order and obey the laws which should be based on the rights and freedoms within the outline of justice. However, the interest of the group must take precedence over that of the individual.

Since its inception, the Muslim World League has gained more than a half a century of experience. It is an Islamic popular universal organization working for the advancement of Islam within the Umma. It is active in introducing it around the world, and defending it against lies, suspicion, erroneous misconceptions leveled at it. The Rabita encourages and promotes the promulgation of security and peace in the world and makes it a priority in the Muslim world. Since terrorism caused by extremist thoughts, is an aggressive behavior designed to breach security and undermine the bases of stability, and is in blatant contradiction the provisions of the Sharia and its purposes, the priority of the Rabita is to address this scourge. Since this bane neither adheres at a particular religion, nor belong to a defined nationality, the MWL is addressing it stoic through its publications, conferences, seminars, and various other activities.

Throughout its various events, the Muslim World League invites everyone concerned to coordinate Islamic efforts. Each according to his abilities, competence and expertise is called to contribute in this endeavor. The aim is to create a platform for joint action to stop this abnormal terrifying phenomenon that poses threats to everyone in its tracks. Its eminent danger won’t be limited to the physical harm to people's lives, nay, it will reach the ideological sides too, and this in itself is far more hazardous and malicious. If the groups espousing terrorist methods ever take the reins of power, they will spread a distorted Islam than the well-known moderate, tolerant and compassionate one. They will scare people away and its enemies will increase their vicious attacks against it. Then, the campaign against Muslims will gain momentum and increase in intensity everywhere.

In this sense, the Rabita took the initiative to welcome the Islamic Military Alliance to fight terrorism. The latter was announced in the spring of last year of Rabi I (December 2015 AD) and it includes more than thirty Islamic states led by Saudi Arabia. The Alliance is based on the provisions’ agreement of the Organization of Islamic Cooperation (OIC) as a springboard for joint actions at the level of the Islamic countries to combat terrorism in all its forms and manifestations. Since the Alliance efforts aren’t limited to military actions but expands to include ideological and media aspects, the MWL has announced its willingness to fully cooperate with it.

The Muslim World League has also praised the Saudi Arabian Ministry of Defense’s Ideological Warfare Center on extremism and is determined to lend it its complete support and cooperation, hence it is another stage for joint Islamic action on the ideological levels. This Center reflects a universal aspect through which the Kingdom tackles this scourge of extremism; since it recognizes the necessity for a wide-ranging cooperation to fight it.

Finally, I would like to thank the Islamic Republic of Pakistan, represented in this gathering by His Excellency President Mamnoon Hussein’s patronage  of this significant conference. It is within this agenda of Islamic Cooperation, which characterizes the Pakistani government since it enjoys pioneering strategic ties with the Government of the Kingdom of Saudi Arabia, under the leadership of the Custodian of the Two Holy Mosques King Salman bin Abdul Aziz Al Saud; the Crown Prince and the Deputy Crown Prince, May Allah guide their steps to what benefits the entire Umma.

I also would like to thank the Central Association of Ahl-ul Hadith (Markazi Ahl-ul Hadith Jama’a), Pakistan, represented by its General Supervisor His eminence Sheikh Sajid Mir. His cooperation in organizing as well as the efforts exerted in preparing and hosting this conference is greatly appreciated. May Allah grant you ample rewards for the warm welcome accorded to the Rabita’s delegation.

My sincere thanks are due to the Ambassador of the Custodian of the Two Holy Mosques in Islamabad, His Excellency Mr. Abdullah bin Marzouq Al-Zahrani and the attention he has given to this conference as well as coordination with the Rabita’s Regional Director Dr. Abdu Mohammed Atain. I wish him further success in supporting the strategic relations between Saudi Arabia and Pakistan on both the official and popular levels. 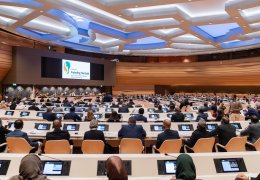 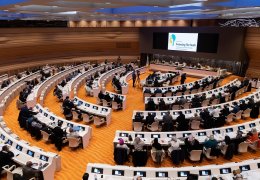 Excerpts from the Speeches of Participants MWL Conference in final session