The MWL: The Kingdom has Begun to Address the Khashoggi's Case with its Transparent and Fair Approach Derived from its Islamic Constitution 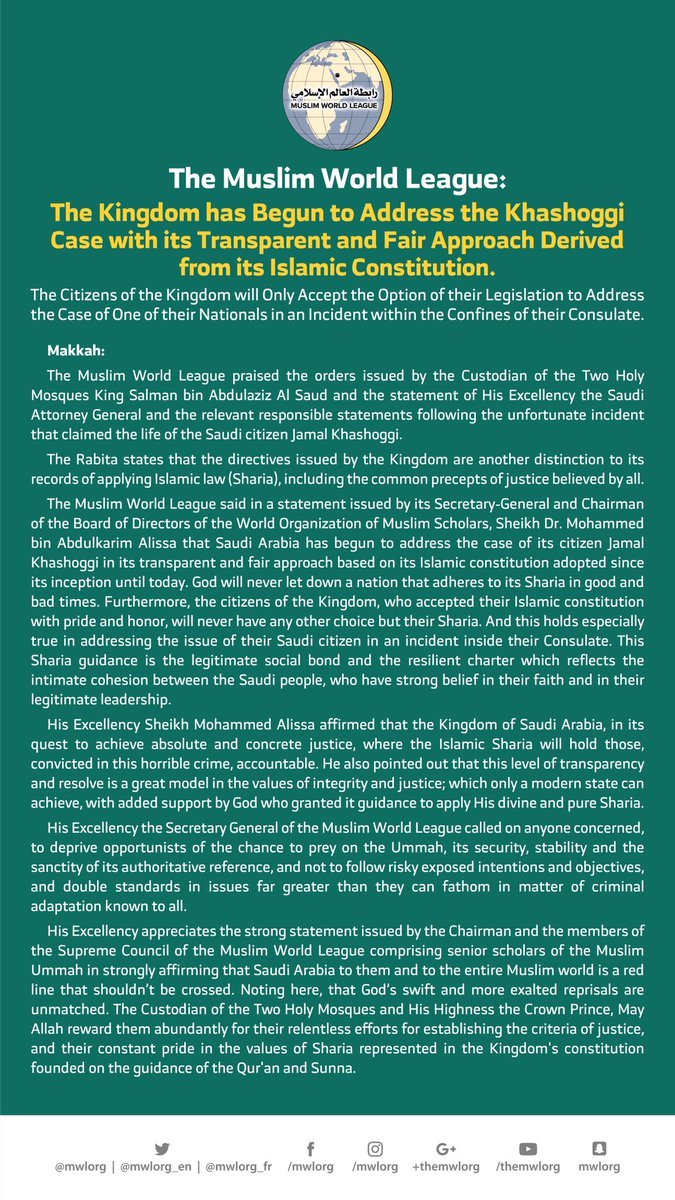 Muslim World League: The Kingdom has Begun to Address the Khashoggi Case with its Transparent and Fair Approach Derived from its Islamic Constitution.

The Citizens of the Kingdom will Only Accept the Option of their Legislation to Address the Case of One of their Nationals in an Incident within the Confines of their Consulate.

The Muslim World League praised the orders issued by the Custodian of the Two Holy Mosques King Salman bin Abdulaziz Al Saud and the statement of His Excellency the Saudi Attorney General and the relevant responsible statements following the unfortunate incident that claimed the life of the Saudi citizen Jamal Khashoggi.

The Rabita states that the directives issued by the Kingdom are another distinction to its records of applying Islamic law (Sharia), including the common precepts of justice believed by all.

The Muslim World League said in a statement issued by its Secretary-General and Chairman of the Board of Directors of the World Organization of Muslim Scholars, Sheikh Dr. Mohammed bin Abdulkarim Alissa that Saudi Arabia has begun to address the case of its citizen Jamal Khashoggi in its transparent and fair approach based on its Islamic constitution adopted since its inception until today. God will never let down a nation that adheres to its Sharia in good and bad times. Furthermore, the citizens of the Kingdom, who accepted their Islamic constitution with pride and honor, will never have any other choice but their Sharia. And this holds especially true in addressing the issue of their Saudi citizen in an incident inside their Consulate. This Sharia guidance is the legitimate social bond and the resilient charter which reflects the intimate cohesion between the Saudi people, who have strong belief in their faith and in their legitimate leadership.

His Excellency Sheikh Mohammed Alissa affirmed that the Kingdom of Saudi Arabia, in its quest to achieve absolute and concrete justice, where the Islamic Sharia will hold those, convicted in this horrible crime, accountable. He also pointed out that this level of transparency and resolve is a great model in the values of integrity and justice; which only a modern state can achieve, with added support by God who granted it guidance to apply His divine and pure Sharia.

His Excellency the Secretary General of the Muslim World League called on anyone concerned, to deprive opportunists of the chance to prey on the Ummah, its security, stability and the sanctity of its authoritative reference, and not to follow risky exposed intentions and objectives, and double standards in issues far greater than they can fathom in matter of criminal adaptation known to all.

His Excellency appreciates the strong statement issued by the Chairman and the members of the Supreme Council of the Muslim World League comprising senior scholars of the Muslim Ummah in strongly affirming that Saudi Arabia to them and to the entire Muslim world is a red line that shouldn’t be crossed. Noting here, that God’s swift and more exalted reprisals are unmatched. The Custodian of the Two Holy Mosques and His Highness the Crown Prince, May Allah reward them abundantly for their relentless efforts for establishing the criteria of justice, and their constant pride in the values of Sharia represented in the Kingdom's constitution founded on the guidance of the Qur'an and Sunna. 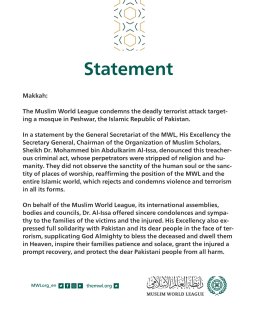 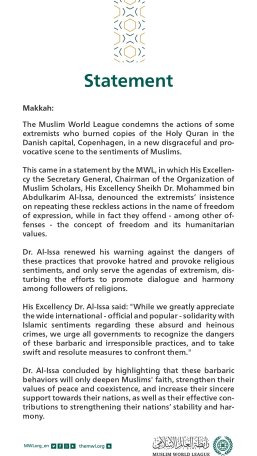