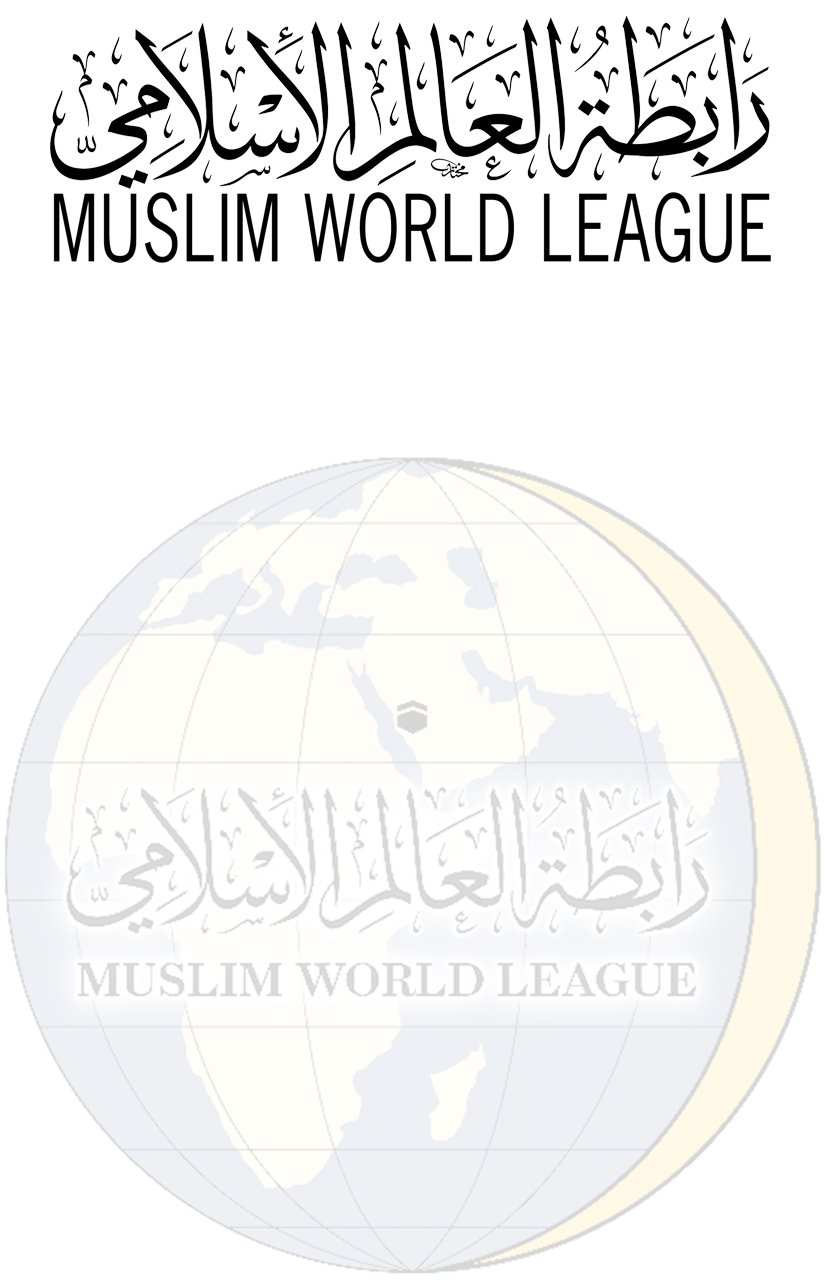 MWL say: The severance of relations  with Qatar came  in accordance  to the Islamic, legal and logical necessity towards Qatari practices

The procedure adopted by the Kingdom of Saudi Arabia and other sister countries aim to create necessary guarantees to safeguard its security, stability as well as deter vicissitudes of time

Factors nourishing  terrorism were like the prey that sought dishonestly protection in Doha in which it found incubating and supporting environment.

Islamic and humanitarian values as well as international laws and norms reject intervention in the internal affairs of countries, let alone destabilization of  their security and stability

The Muslim World League (MWL)  has expressed in a statesmen issued by it its full support for the temporary resolutions adopted by  the Kingdom of Saudi Arabia, UAE, Kingdom of Bahrain, Egypt, Yemen, Libyan government for the severance of relations with Qatar. Furthermore, it indicated that  this procedure came in accordance to the Islamic, legal and logical necessity towards the practices that target the security and stability of countries via sheltering and supporting  terrorist groups and organizations, followed by the unfortunate and unacceptable intervention in their internal affairs as well as influencing the integrity and harmony of their respective peoples.

The MWL' statement added that " The factors nourishing  terrorism have now become like the prey, after they have been vigorously fought and their vanquished members pursued at the wake of exposure of  their  criminal  arrangements which were represented  in boody-trapping the intellects of young people as well as instigating their religious  enthusiasm towards adopting extremist ideas. The prey continued till it dishonestly found an incubating and supporting environment. In fact, terrorism was not able to find any forum through which it passes its messages except  the way of this dangerous and risky sheltering source, which spared no effort in  exploiting all its capabilities, including the employment of mass media as well as its suspicious contact. There is no concern more than betting of these nourishing factors on the protection and patronage of a state.

Through the review of the criminal symbols of the terrorist  organizations in the case of ISIS and Qaedah, we remark that these symbols have been produced by the incubators of these terrorist groups and organizations, the top most of which is Muslim Brotherhood Group. This Group directed its message and mission towards he first torch for terrorism in the name of religion via what is called political Islam so as to penetrate  the distinct of peaceful religious tendency in the Islamic consciousness to deviate part of it towards these pitfalls.

The MWL recognizes for sure via its quarries that the Muslim World  did really live throughout  history without knowing this political exploitation  in the name of Islam which is represented in its terrorist dimension, flagrant intervention in the internal affairs of countries and  its attempt for the secret spoiling of the intellects of their citizens, disturbance of their tranquility and failure in honouring their regional as well as  international commitments and obligations.

In many countries, these  groups and organizations have altered certain of  the hidden isolated religious intolerance theories, whose impact hadn't surpassed the extent of the papers on which they were written  and the abstract expression of their views, into active factors- after  - of course - providing them with added terrorist thoughts-  that target the compelling of all to adopt their misleading concepts, according to hectic political  activity, through which they practiced violence and confrontation. Furthermore, these  groups and organizations have started to export to ISIS /DAESH the outcomes of their attraction for a section of naïve youth, who have been misled and persuaded with these  thoughts, till this  sparks, which expanded to Muslim communities in a number of countries,    was able through its supported suspicious movement to create due penetration in the tiny and peaceful body of inexperienced youth.

The incidents of history have witnessed that any religious tendency , whenever it was politically snatched, its unquestionable results centred over destabilization of security and stability as well as intervention in the internal affairs of countries, violation of freedom of peoples,  negligence of values and non-observance of covenants.

Therefore, we confirm that the procedure adopted by the Kingdom of Saudi Arabia and sister Arab and Muslim countries aims to create the required guarantees that safeguard their security and stability as well as deter from them vicissitudes of time.

Any  shrewd individual realizes that these countries , with their known history, which is replete with the optimum model for observing good neighborhood, brotherhood, friendship, moderation and peace, would not have taken such significant decision if  they were not forced to do it  so as to protect themselves from the danger of terrorism and extremism. Furthermore, the Kingdom of Saudi Arabia, in its capacity as an umbrella and reference of Muslims because it embraces their sanctuaries, wants to send a conspicuous message to all that Islam is innocent of both these extremist thoughts and any one providing patronage or support for them; and that the calamities of violence and terrorism, from which all people suffered, have been primarily made at these terrorist incubators.

The MWL concluded its statement by stressing that Islamic and humanitarian values as well as international laws and norms reject  the intervention in the internal affairs of countries, let alone destabilization of  their security and stability via sheltering and supporting terrorist groups and organizations as well as media promotion for their strategies and plans. 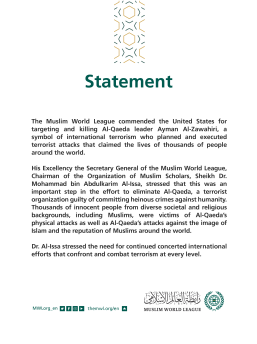 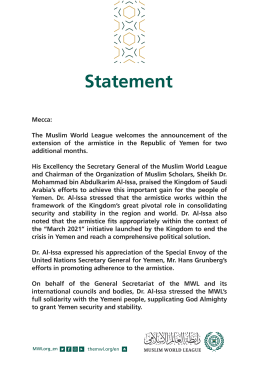 Muslim World League Secretary General H.E. Sheikh Dr. Mohammad alissa expresses his appreciation for the efforts of the Kingdom of Saudi Arabia in achieving an extension of the armistice in Yemen, a vital gain for the Yemeni people