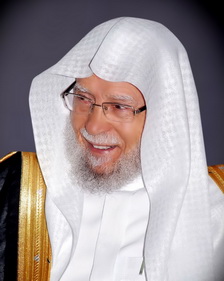 Secretary-General of the Association:

Studying at the College of Shari'a in Riyadh, where he graduated in 1383 AH
Graduate Studies:
Masters: Received a master's degree from the Higher Institute of Justice in Riyadh with the grade "Excellent" in 1389 AH on the topic "Reasons for the difference of jurists", which deals with a major issue in the lives of Muslims past, present and future, the issue of diversity of visions, , And appreciation of the interest, within the framework of agreement on the conditions of discretion
PhD: Received the degree of "PhD" from the Faculty of Sharia and Law - Al-Azhar University - the first honor in 1393 AH on the subject of "the origins of the doctrine of Imam Ahmad" with the recommendation to print the letter and exchange between universities
Honorary Doctorate:
Awarded honorary doctorate degree from Zagazig University in 1408H
He was awarded an honorary doctorate from Abyei State University in Makata, Kazakhstan, in 1424H in recognition of his outstanding efforts in achieving cooperation between the University, the Islamic World League and Islamic Universities
International Awards:
- Dubai International Prize for the Holy Quran, where he was chosen as the Islamic personality of the Islamic Personality of the Sixth Session of the year 1423
King Abdullah International Award for Scholars and Preachers, where he was awarded the award in Ramadan in 1424H

His service in the field of education and administration:

He worked as a teacher at the intermediate and secondary levels of scientific institutes, then as director of one of them, then directed to it, and then a member of the teaching staff at the Faculty of Sharia in Riyadh, and that was from 1382H to 1388H ..
On 21/7/1388H, he was appointed dean of the Faculty of Arabic Language in Riyadh and remained its dean for six years. He was keen to serve the Arabic language, convinced that the intellectual, scientific and intellectual renaissance in the Islamic world would not be achieved in its original sense. The path of serious and comprehensive advancement in Arabic is a tool for understanding the Quran, Sunnah and heritage, and a means of understanding the public and private, and a mirror of ideas and opinions, and Sana of literature and science ..
On 22/12 / 1394H became an agent of the University of Imam Muhammad bin Saud Islamic, and then on 7/2/1396 AH as its director until 20/1/1414 H ..
During this period, he was keen to promote Imam University with its duty, particularly in the field of Islamic and Arab sciences, and to contribute to the advancement of Islamic sciences.
On 20/1/1414H, he was appointed Minister of Islamic Affairs, Endowments, Da'wah and Guidance. He supervised the King Fahd Complex for Printing the Holy Quran to 2/3/1420H. He was appointed as a consultant at the Royal Court with the rank of Minister.
On 8/8/1421 he was appointed Secretary General of the Muslim World League.

His media contributions:
He had a number of radio interviews in the radio of the Kingdom of Saudi Arabia in various subjects. Intellectual, cultural, social and guidance ..
On television, he had a regular program in which he answered the questions of the jurisprudential and social viewers. He also had numerous television contributions, including personal interviews and joint seminars.
He has press releases translated by numerous interviews, interviews and articles in daily newspapers, weekly and monthly magazines.

His various contacts:
By virtue of his work and interests, he had tours and contacts, the scope of which extended to include the most regions of the world.
There is a dialogue between him and the Saudi students who are sent abroad, especially in North America and Europe.
His participation in periodic conferences held by Islamic associations, organizations and institutions in Europe, America, Asia, Africa and Australia.
This effort has had good results in terms of establishing links with the elite of the Islamic world, including scholars, thinkers, advocates and officials in various locations, and with Muslim youth who are willing to cooperate for a better life for the Ummah of Islam and with a number of international institutions and personalities that are familiar with the civilization of Islam, The status of Muslims ..

His efforts in the field of education:
He has been a member of the conferences and meetings of the Federation of Arab Universities during his tenure as Director of the Imam Muhammad Bin Saud Islamic University. He participated in its most important founding and development activities, For the Association of Islamic Universities and Conferences and Executive Council, and participated in various committees and educational bodies, and contributed to the establishment of a number of Islamic and Arab universities and schools in the world, and his efforts with the departments of Arab and Islamic studies and centers in Oro And many research and studies programs and scientific books. He also participated in the establishment of a number of encyclopedias, Scientific and Cultural Organization...

His contribution to the service of Islamic and Arabic sciences.
In the service of Islamic and Arab sciences, he contributed his studies and researches through the relevant councils and committees, such as the Supreme Committee for Education Policy in the Kingdom, its preparatory committee and through conferences and seminars held for this purpose.
And through its presidency of the Association of Islamic Universities, its Executive Council, its conferences and specialized seminars, which are especially held to develop Islamic and Arabic studies, and empower them in the curricula of Islamic universities.
And through the universities that contributed to the establishment and study of plans and curricula, such as the Islamic University of Niger, the International Islamic University in Islamabad, and other universities that are based primarily on the service of Islam and its sciences, and through the support of this science,