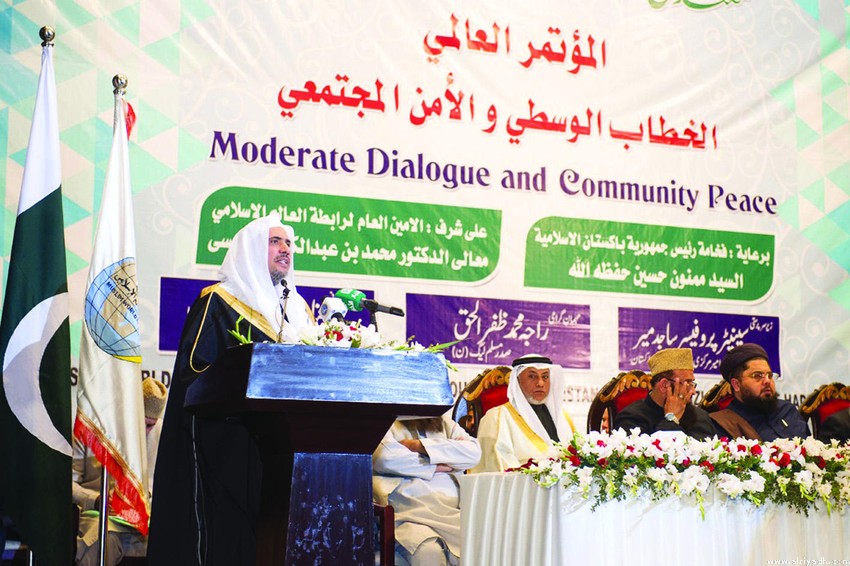 In the name of Allah the Most Gracious the Most Merciful

Praise be to Allah, and peace and blessings be upon the seal of the prophets and messengers, our master and our Prophet Muhammad and his family and companions

His Excellency the President of the Islamic Republic of Pakistan Mr. Mamnoon Hussein patronized the conference and wished it success.

Then, His Excellency, the Secretary General of the Muslim World League Dr. Mohammed bin Abdulkarim Al-Issa delivered a speech in which he thanked the President and his government for their cooperation in organizing the conference. He also highlighted the enduring dedication of the Rabita in stating   Islam’s pristine facts and its tolerant principles. In its diversified activities, the League strives to consolidate moderate and centrist approaches, and counteract the of deviated and aberrant currents . The secretary general is hopeful this conference will provide a clear Islamic vision that will embed the values of moderation in the community; immunize our sons against slipping into the paths of fanaticism and extremism. Furthermore, he hopes that this gathering will stimulate youth of this Umma to work on achieving its security, prosperity and stability, and above all build bridges of peace, coexistence and tolerance with all; and thwart the theories of terrorism which misuses Islam for political purposes; especially to stand up to false slogans and misguiding propaganda. He also stated that Islamic discourse today is passing through theoretical throes and challenging initiatives on the road to a modernization stage that must be compatible with Sharia’s regulation in a changing time, place and events.

His Excellency the Pakistan Minister of Religious Affairs and Interfaith Harmony, Mr. Sardar Yusuf welcomed His Excellency the secretary General and his accompanying delegation. He called for exerted efforts on both official and popular levels to protect future generations and build their character in accordance with Islamic moderate components that shun excess and negligence.

Throughout the sessions, the participants discussed the topic of the conference:

The participants reviewed the research presented to the conference, which confirmed that moderation is a religious sublime principal and authentic approach, since God has sent His Messenger Muhammad ﷺ with the pure tolerant religion. Since then, and throughout the ages, scholars of Islam have explained this great Islamic principle, and clarified its attributes in its various aspects: basics and branches, creed and worship, ethics, behavior, perception and actions. So Islam spread throughout the earth, and its benefit and goodness encompassed humanity. Allah Almighty in Sura Al-Anbiya, verse 107: (We have sent you (O! Mohammad) but as a mercy to the worlds.

To shed light on the noble Islamic principle, and clarify its facts and concepts, the Conference determined the following:

The Conference participants discussed the phenomenon of militancy and ideological extremism popping up now and again in various organizations and in different forms. These extremist views have plunged many countries in a state of strife and bitter conflicts, and generated a frayed security, economic deterioration, and social rift.

They agreed that in order to address this phenomenon they must deal with it in an all inclusive way. Its various intellectual, psychological and social dimensions must be investigated. Its causes must be analyzed and its various effects and repercussions must be monitored. Finally an appropriate remedy of its ills must be extracted.

They also emphasized the responsibility of scholars and preachers to enlighten the nation's youth and make them aware of the reality of Islam and its moderate stance, and its opposition to all kinds of extremism and fanaticism. The time has come for scholars to show firmness and determination and thwart any attempts to steer Islam away from the moderate approach and the values of love and brotherhood.

As a warning against the negative effects of the phenomenon of extremism and how to address them, the conference emphasized the following:

The participants stressed the importance of security in people's lives. Maintaining this security becomes a legitimate demand and a significant necessity for a stable community. The message of Islam is one that implements security, peace and cooperation among the people through righteous conduct and piety. None of this will be achieved but through faith and good deeds. Allah says in Sura Al-An’am, verse 82: “It is those who believe and confuse not their beliefs with wrong - that are (truly) in security.”

They called for disseminating Islam’s noble values and principles which include its sublime ideals that promote relations with others. These ethics are based on well-established rules of justice, compassion and charity. Allah says in Sura An-Nahl, verse 90: “Allah commands justice, the doing of good, and liberality to kith and kin, and He forbids all shameful deeds, and injustice and rebellion”

They warned of ideological aberration that leads to the rebellion against the group, disobeying the ruler and haphazardly accusing Muslims of apostasy; shedding blood, violating what Allah has made sacred, damaging public and private properties.

To achieve security and stability, the participants stressed the following:

Following are the recommendations passed by the conference participants:

The participants praised the great efforts made by the Custodian of the Two Holy Mosques King Salman bin Abdul Aziz Al Saud, the Crown Prince and Deputy Crown Prince, in their endeavor to unite the Muslims and achieve security, peace and stability in the region. They expressed their pleasure and appreciation to the Kingdom of Saudi Arabia for initiating the Islamic Military Alliance, and   establishing the Ideological Warfare Center of the Ministry of defense in the Kingdom. God willing, these two citadels will be the protective shield and the fortress which will safeguard the Muslim Umma’s assets, wealth, resources and youths. Moreover, this fortress will promote ways to achieve world peace and security, especially in defeating and dismantling the message of extremism; the roots that feed violence. Moreover, vacant spaces which were used by fanatics must be filled with a resolute response to disprove terrorist ideas.

The participants thanked the Muslim World League’s blessed efforts in disseminating the tolerant principles of Islam and standing up to the extremism’s unreasonable currents of excessiveness. They also requested the Rabita to develop further activities and programs aimed at promoting community and world peace.

May Allah’s peace and blessing be upon our Master; our beloved Prophet Mohammad, his family and companions. 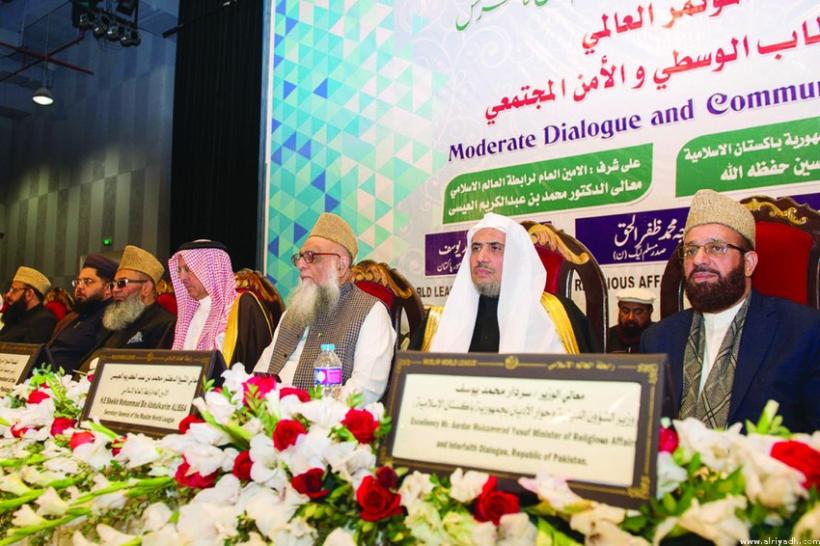 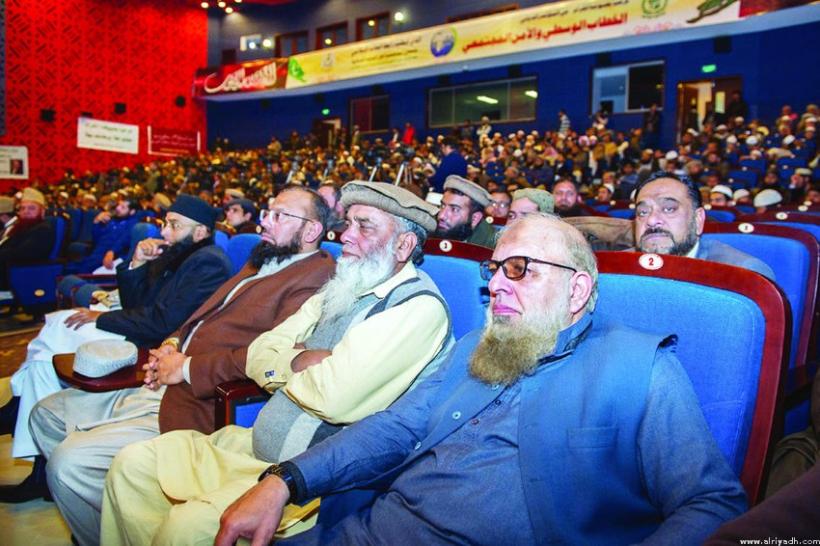 Distinguished MC pauladiasleite closed our 2nd and final day UNG eneva by reading the Final Conference Statement
Excerpts from the Speeches of Participants MWL Conference in final session
HE Dr. Mohammed Alissa we must favor a general shift toward moderation, so young people may grow into responsible stewards of society